One fish that Swan missed in her list of the many Bay Area musicians who have traveled east is Burlingame-raised reed expert Steven Lugerner, a rising force on the Gotham scene who performs at Berkeley’s Jazzschool on Monday with trumpeter Itamar Borochov, pianist Glenn Zaleski and drummer Max Jaffe (the same band also plays San Francisco’s Red Poppy Art House on May 26).

The quartet is a distilled version of the New York septet featured on “Narratives,” one half of his ambitious debut CD, a double album that includes “These Are the Words,” a stellar quartet session featuring pianist/composer and UC Berkeley professor Myra Melford, trumpeter Darren Johnston, and drummer Matt Wilson.

Lugerner is back in town to celebrate the release of the new albums, which are both dedicated to his incisive original compositions, tunes that provide sturdy structures for rambunctious, melodically inventive improvisation.

After collaborating as a sideman with heavyweights such as pianist Fred Hersch, percussionist John Hollenbeck, East Bay saxophonist Dayna Stephens and SFJAZZ Collective founder Miguel Zenon, Lugerner is more than ready to step forward as a leader in his own right.

Among the most consistently exhilarating albums released so far this year, Lugerner’s debut immediately establishes his status as a heavyweight himself.

There's been a downward trend for housing units submitted, staff says: 1,045 down from about 1,450 last year. The number of approved units has been growing. #berkmtg 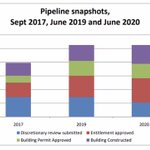 Now up: the city's annual housing pipeline report. It covers projects that have been submitted but not approved; approved projects that don't have permits; buildings under construction; and completed projects. https://www.berkeleyside.com/wp-content/uploads/2020/09/2020-09-22-Item-A-Annual-Housing-Pipeline-Report.pdf #berkmtg

@berkeleyside Can any human actually make good decisions and remain sharp & productive at the end of a 4 hour meeting?