Election 2020: What to know | Weather: The latest | Census: Be counted | COVID-19: The numbers ● Help local workers | PLUS: The Oaklandside is live

Nine buildings have been singled out as representing the best new design work in Berkeley for 2010-2012. Berkeley Design Advocates, a volunteer group of architects and urban planners, selected three UC Berkeley buildings, a restaurant, a senior home, two retail spaces — one newly built, one restored — a wine store, and the renovation of a branch library from a list of 15 submissions, and handed out the award certificates at a ceremony on Thursday, March 28. (See the 2013 Awards Brochure for full details.)

This year threw up a particularly impressive crop of winners, according to Anthony Bruzzone, President of BDA, who said that two years ago, with the recession having put the kibosh on many construction projects, the group was concerned it might have no buildings to consider at all in 2013.

“But then, last year, things got better,” he wrote in the awards brochure. “A few small projects here, a few deep-pocketed individuals there, and of course the university projects were in full swing… Not a moment too soon… This year’s Awards feature some of the most creative and inspired designs that BDA has ever acknowledged.”

The BDA awards make a point of honoring the whole team behind a new project or renovation. So owners, builder/contractors, engineers, landscape designers and interior designers are recognized, as well as the architects.

Other than the biennial awards, BDA also works on ad-hoc projects when it feels its members’ expertise can be helpful to the community. Most recently it organized a charrette to solicit ideas for the revitalization of Berkeley’s Telegraph Avenue.

Speaking after the awards ceremony last week, local architect David Trachtenberg, whose firm was honored for two projects, said: “It’s great to work in Berkeley because the city has so many wonderful people and unusual projects. We get to expand on people’s personal passions and there’s a real entrepreneurial spirit here.”

Tilden enthusiasts: I'm writing a story for @Berkeleyside about how Jewel Lake has been filling with silt and disappearing over the years (see before/after below). If you have thoughts about Jewel Lake/used to go there/still do etc., I'd love to talk! Email in bio, DMs are open 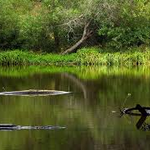 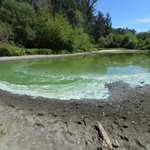 Near Surface Smoke Forecast for Saturday and Saturday night: Smoke from the #AugustComplexFire will spread across the #BayArea today, but near surface smoke concentrations will remain mostly light. Smoke will then begin to increase in the #NorthBay by late tonight. #CAwx #CAFires

Drowning the newest loss and disappointment in distraction, hey @berkeleyside has the @cheeseboard line ever crossed #Henrystreet before?