The family of a 21-year-old Irish woman who was seriously injured in the collapse of a fifth-floor balcony at the Library Gardens apartment building in Berkeley has posted photos of her progress on a Facebook page.

Clodagh Cogley was one of 13 people who fell nearly 50 feet to the ground after the balcony failed on June 16. Six of her friends were killed, and she and six others were seriously injured.

Cogley said on Facebook last week that chances were “bleak” that she can use her legs again. Yet the Trinity College, Dublin, student showed an amazing determination to look on the bright side of the accident.

“Life is short and I intend to honor those who died by living the happiest and most fulfilling life possible,” Cogley wrote, as Berkeleyside reported last week in an update about the conditions of all the survivors.

Cogley has moved to a rehabilitation facility in Santa Clara, one, she excitedly reported on Facebook, with dog therapy.

“Clodagh was seriously injured in the recent balcony collapse in Berkeley and her life will never be the same again. But like everything Clodagh has ever done she’s facing into this with courage and determination,” the gofundme page states.

It continues: “In a recent inspirational Facebook post Clodagh herself urges all of us to ‘Enjoy a good dance and the feeling of grass beneath your feet like it’s the last time because in this crazy world you never know when it might be.’”

“We want to give Clodagh the best start possible as she embarks on this new phase in her life. Her family house will need to be adapted significantly to meet Clodagh’s needs and accommodate a wheelchair and there’ll be numerous other expenses – we want to help with this.

Of the seven injured, two students, Sean Fahey and Conor Flynn, have been released from the hospital, Philip Grant, the Irish consul general for the Western United States, told Berkeleyside last week. Fahey has returned to Ireland, while Flynn remains in Walnut Creek to be “monitored,” Grant said. Jack Halpin remains at John Muir Medical Center in Walnut Creek.

None of the other injured students would be returning to Ireland for several weeks, Grant said, because of the protocols surrounding their various injuries, specifically lung injuries. After puncturing or collapsing a lung, an injured person cannot fly on an airplane until fully recovered.

Get the latest Berkeley news in your inbox with Berkeleyside’s free Daily Briefing. And make sure to bookmark Berkeleyside’s pages on Facebook and Twitter. You don’t need an account on those sites to view important information.

City staff says conversations have been ongoing about water availability and that Berkeley is ready to put $10,000 toward a water tank for the Berkeley Free Clinic. #berkmtg

The entire Berkeley City Council and city manager (it's tough to get them all on the screen at once; lots of dipping in and out during these long meetings). #berkmtg 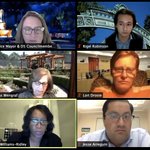