COVID-19: By the numbers ● Get tested | ELECTION 2020: Final results ● Berkeleyside is hiring! | PLUS: The Oaklandside

Lillia Bartlow got to ride in style to her first day of fifth grade at John Muir Elementary School on Tuesday.

The 9-year-old, who was hit by a taxi in March while on a Claremont Avenue crosswalk with her mother after a PTA meeting at school, rode in a shiny red fire truck, courtesy of Engine Company 3 of the Berkeley Fire Department.

The unusual trip was arranged by the Berkeley Firefighters Random Acts of Kindness program, which also provided a pool membership at the YMCA this summer for Lillia and her mother, Khadija Bartlow.

See a photo slideshow of this morning’s BFD escort below.

Lillia said she was excited about the ride Tuesday morning as she waited for the fire engine to arrive. Before the engine pulled up in front of her family’s Ashby Avenue apartment, Lillie was dancing around, a huge smile on her face.

That was a huge difference from her homecoming from the hospital in March. The taxi that hit Lillia on March 8 broke both her legs. Rods were placed in her femurs and she had to use a wheelchair to get around, said her father, Darryl Bartlow. Her family at first feared Lillia would have to use a wheelchair for a year, but the girl, who loves gymnastics, was able to walk by June.

Those long months of recuperation were hard. Lillia couldn’t attend school and was tutored three times a week at home instead. She was often in pain. She faces another operation in a year to remove the rods. But those dark days seemed forgotten on Tuesday.

“It’s a big day for her and me,” said Khadija Bartlow. “It’s been a long road and not always easy but we want to focus on today. Seeing her excited is a good day for me.”

(Click through the photo slideshow below using the right and left arrows.) 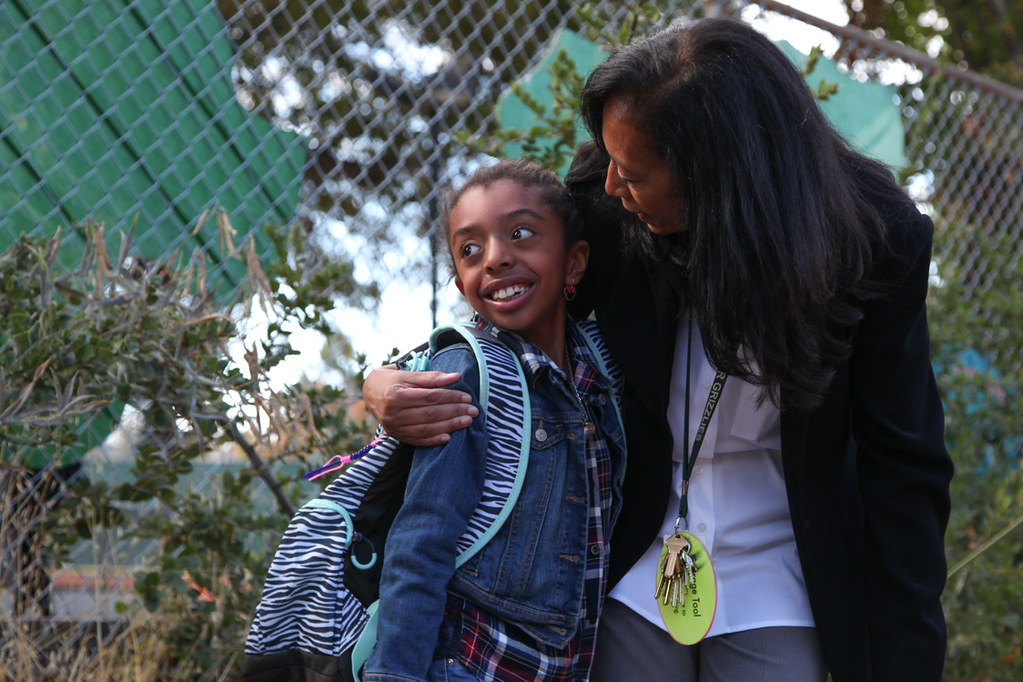 The accident sparked outrage among parents whose children attend John Muir. Claremont Avenue is a major thoroughfare with four lanes, and cars speed past the school. Parents and nearby residents have been lobbying Berkeley for years to install more traffic-calming measures such as blinking crosswalks or a traffic light. There is a crossing guard employed before and after school, but not when many children leave the after-school program.

Berkeley applied in May 2015 for a $400,000 grant from the Safe Routes to School Program, but its application was denied.

After the March incident, City Councilwoman Lori Droste was able to work with the City Council to get it to approve using $335,000 from the city’s budget to improve pedestrian safety in the Claremont Avenue crosswalk in front of the school. On Monday, Droste said she didn’t know the exact timeline for the improvements but said she hoped Berkeley makes this stretch of road a priority.

“The next step is to get it up as quickly as possible,” said Droste.

Berkeley firefighters called to the crash wanted to do something more for the Bartlow family beyond the initial response, said Dori Tieu, a firefighter who serves as the treasurer of the Random Acts of Kindness program. Firefighters at the station at 2710 Russell St. responded to Lillia’s case and they were the ones who drove her to school.

“We are super excited to have you on our fire engine,” Tyre Mills III told Lillia before she got on the truck.

Lillia had a huge smile on her face as she climbed aboard.